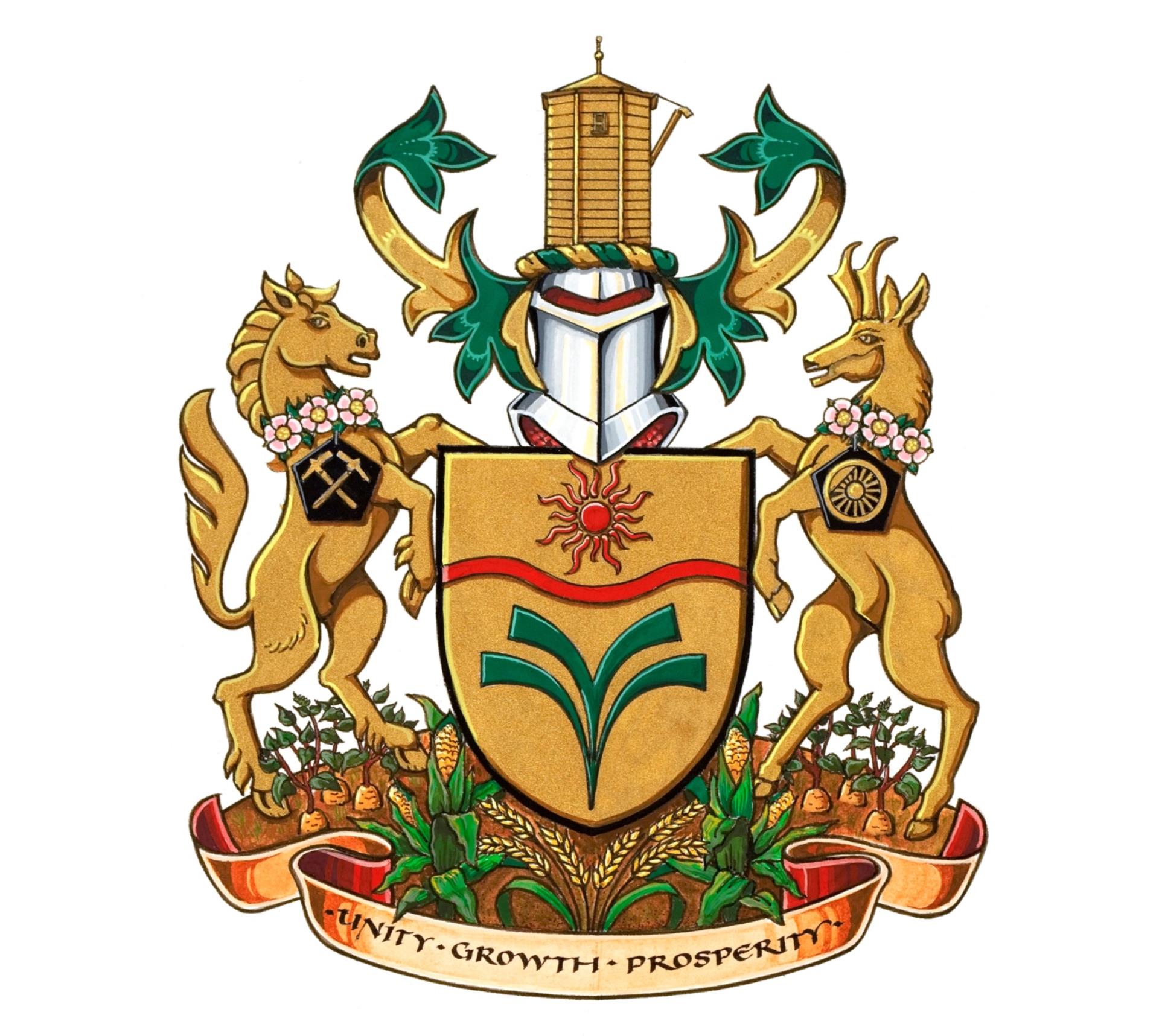 The Town of Taber was originally incorporated as a Village on March 15, 1905. This was when Alberta was still a District of the North-West Territories; Alberta became a Province of the Dominion of Canada on September 1, 1905.

In 2004 the Town petitioned the Chief Herald of Canada for a Grant of Arms; that is, for an official Coat of Arms from the Sovereign of Canada as authorized by the Canadian Heraldic Authority, an office of the Governor General of Canada.

Coats of Arms (also called armorial bearings) are an Honour from our Sovereign, Queen Elizabeth II, The Queen of Canada. Arms are granted to Canadian individuals and institutions on Royal authority through the Canadian Heraldic Authority. All Canadian citizens can petition or apply for a Grant of Arms. In Canada and the United Kingdom, Coats of Arms are not granted for families; Coats of Arms are only granted to individuals or institutions such as municipalities, universities, schools and organizations.

On September 15, 2005, the official Letters Patent (Latin for public letters) were issued for the Town of Taber by Chief Herald of Canada, Robert Watt, L.V.O., and the Herald Chancellor of Canada, Barbara Uteck, C.V.O. In the Letters Patent is the official heraldic description of the Armorial Bearings (Coat of Arms) of the Town. This is written in the historical language of heraldry, called the blazon, and begins with the description of the Shield for the Taber Coat of Arms.

Blazon of the Shield 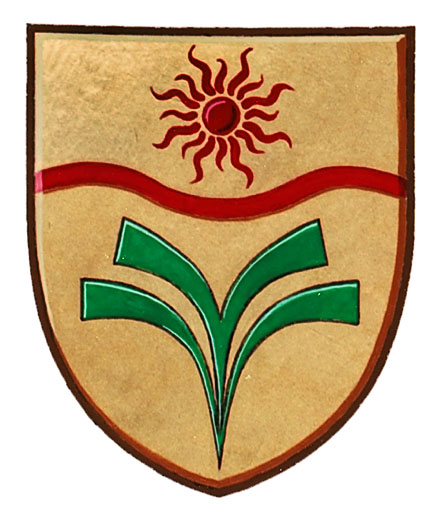 Or a barrulet wavy enhanced between in chief a sun in splendour Gules and in base two chevronels reversed couped embowed and conjoined in apex Vert.

Blazon, the unique language of heraldry, is based on 14th century Norman French. Its use in heraldry enables a single word or simple term to describe a complex diagram.

For the arms of Taber the blazon begins with "Or," the colour gold for the field or background of the shield. "A barrulet wavy" is a thin horizontal bar bent into a wavy shape. Usually a bar or barrulet goes across the centre of the shield; in this case it is "enhanced" or raised higher than its usual position. "In chief" refers to the upper third of the shield; "a sun in splendour" describes the sun with rays coming out of it and both the wavy line and sun are coloured "Gules" or red.

In our modern language the symbolism is the gold shield represents the sun shining on the verdant earth in the area. The spray (the V-shapes) can symbolize a plant reaching for sunlight, an irrigation water-spray, a gusher produced when hitting oil, and a progressive people and community, reaching for the future, always looking up to better things. The wavy bar recognizes the effect of the wind on the surrounding areas.

The shield is based on an original logo of the Town by Ms. Carley Grant in 2000.

The original Letters Patent, the formal hand written and hand painted document, can be viewed in the Town of Taber Administration Building. 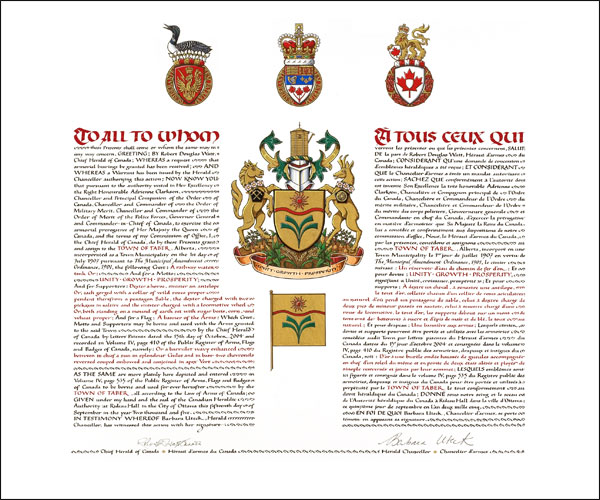 The Letters Patent of the Arms of the Town of Taber, Alberta.
The arms, banner and symbols of authority are hand painted and the calligraphy is hand written.

The heraldic device at the top of a Coat of Arms

Blazon of the Crest

A railway water tank Or. - The water tank represents water tank number 77 that served the early engines of the railroad in Taber and that was the genesis of the town. The heraldic term "Or" means that the colour used for the crest is gold.

The heraldic devices applicable for corporate bodies, including municipalities, and to some individuals in specific categories. They support or hold up the shield and stand on ground called a compartment

Blazon of the Supporters

Dexter a horse, sinister an antelope Or, each gorged with a collar of wild roses proper pendent therefrom a pentagon Sable, the dexter charged with two pickaxes in saltire and the sinister charged with a locomotive wheel Or, both standing on a mound of earth set with sugar beets, corn, and wheat proper.

In heraldry the reference to the sides of a shield are based from the vantage of a person holding the shield from behind it. This means that what appears to our left is from the right hand of the shield, the "Dexter" side and what appears to be on our right side is the left hand side, the "Sinister" side (and sinister simply means left, not evil or bad).

In explaining the Supporters the term “dexter” means that the horse in on the right hand of the shield and “sinister” means that the antelope is on the left hand side; and both are coloured “Or," gold. The horse and antelope are standing on their hind legs to permit their forelimbs to support the shield; thus they are Supporters. Both animals have their head and neck “gorged (passed through) a collar of wild roses proper” (coloured in actual colours). From each collar is hanging a “pendent therefrom a pentagon Sable” (a five-sided black coloured pendent). The “dexter charged” is the pendent on the horse’s collar “with two pickaxes in saltire” which are the two crossed pickaxes; the “sinister charged” is the pendent of the antelope’s collar “with a locomotive wheel." Both are coloured “Or," gold. The term “both standing on a mound of earth set with sugar beets, corn, and wheat” describes the shape and items on the Compartment and these are “proper," coloured in real colours.

In our modern language the horse signifies the pit ponies used in the coal mines. It also represents the horse power of transportation in its various forms, the use of horses in agriculture, the herding of livestock, and the western heritage and culture of cowboys. The antelope represents local fauna. The collar of wild roses represents the province of Alberta. The pentagon shaped pendants emphasize the relationship of the town to its origin of coal mining and rail transportation. Their shape alludes to both coal and the structure of the water tank. The coal fed railway engines, represented by the locomotive wheel. The compartment holds examples of local crops.

The helmet is a heraldic device used to support the Crest and separate it from the Shield. For a municipality the Helmet faces the observer rather that facing at an angle towards the dexter side of the Arms; the way a Helmet would face for Arms of an individual.

The Torse is a heraldic device that joins the Helmet to the Crest; it resembles a twisted cloth and is coloured in the tinctures (heraldic colours) of the Arms. In the Arms for Taber the Torse is coloured “Or” (gold) and “Vert” (green).

The cloth that waves out from either side of the Helmet is called the Mantle. This Mantle is a depiction of a cloth originally draped from the back of the helmet and used to protect the helmet wearer from the hot sun. Its shape is the result of the cloth being ripped and torn from use. It is another aspect of a Coat of Arms used to embellish the image and its tinctures (heraldic colours) reflect the principal colours of the Arms, “Or” (gold) and “Vert” (green). 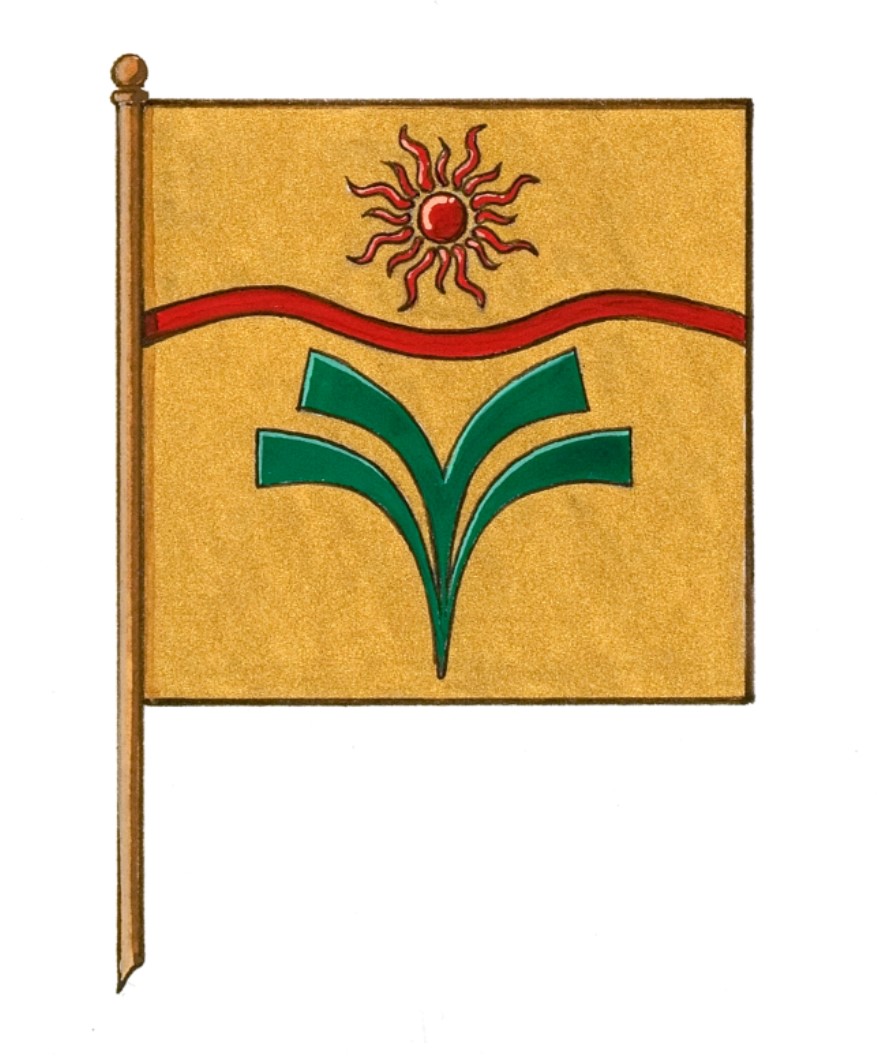 Blazon of the Flag

A Banner of the Arms - In other words, the banner is based on the design of the Shield. A Banner is a square-shaped flag.

Heraldry is the visual link to our Canadian history and heritage. Heraldry is the method of how the national flag of Canada was developed and heraldry can be used to trace back the origin of previous Canadian flags. Heraldry influences the symbols of authority in Canada as used by the federal and provincial governments. The Canadian Honours System for our Orders, Decorations and Medals is based on heraldic practices.

For further details on discovering our heraldic heritage and to see the public register of Canadian Arms refer to the Canadian Heraldic Authority.

For general heraldic information refer to the Royal Heraldry Society of Canada.

Please note that all Heraldry noted above belongs to the Town of Taber and may not be reproduced without written permission from the municipality.