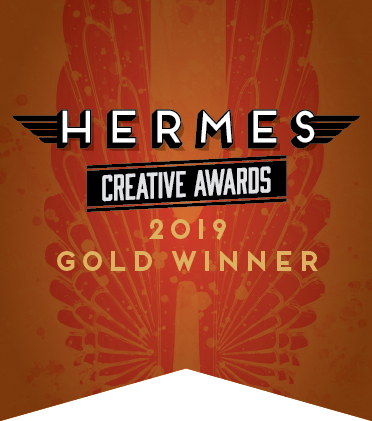 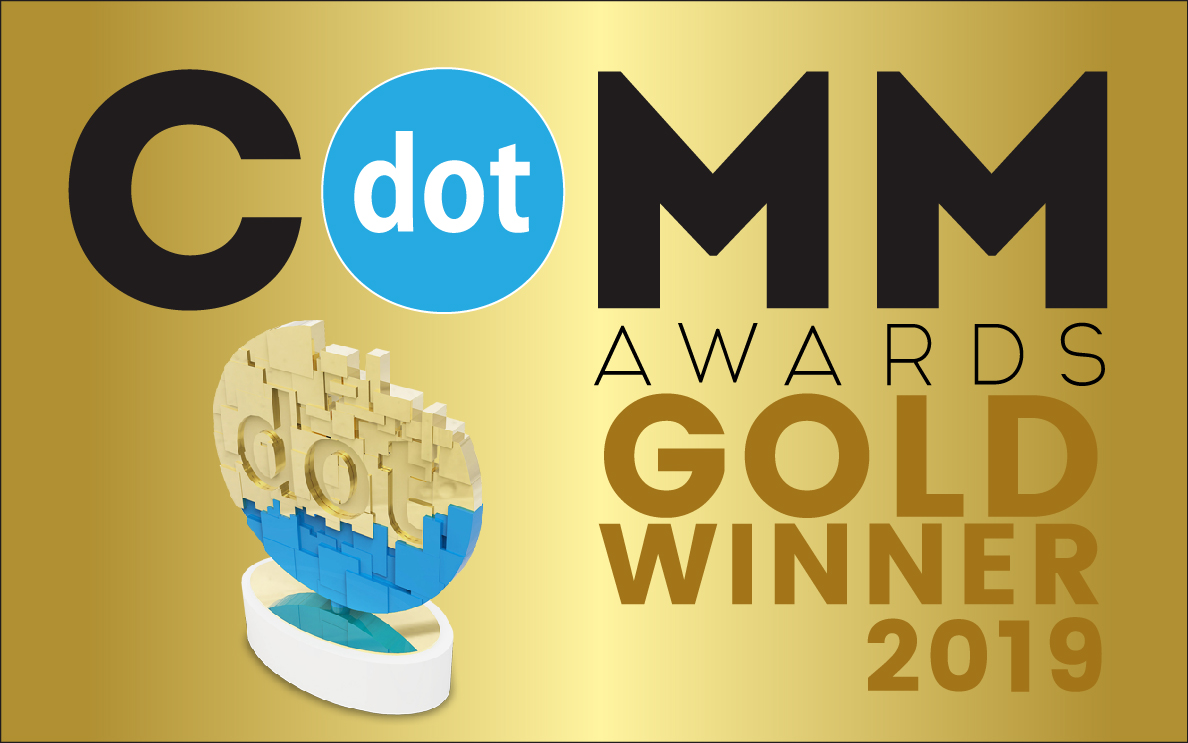 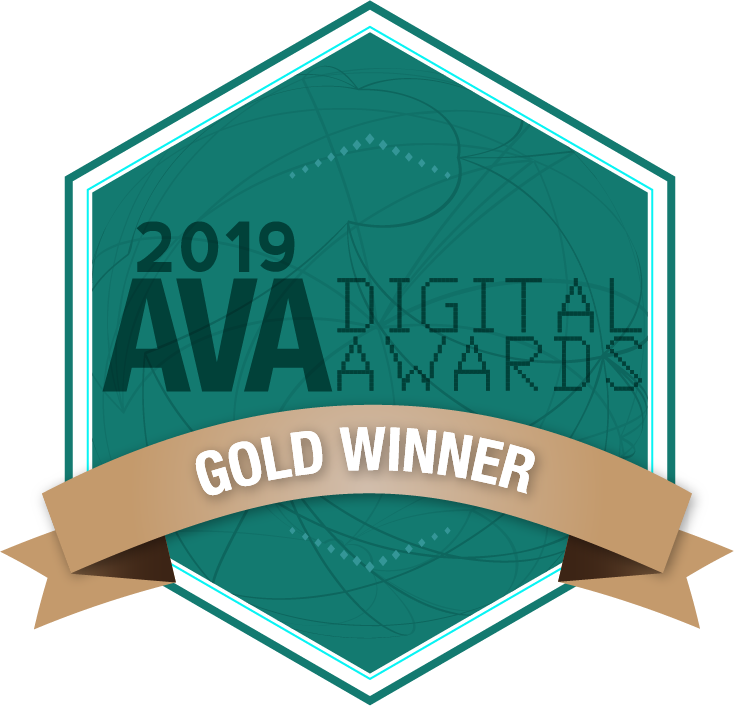 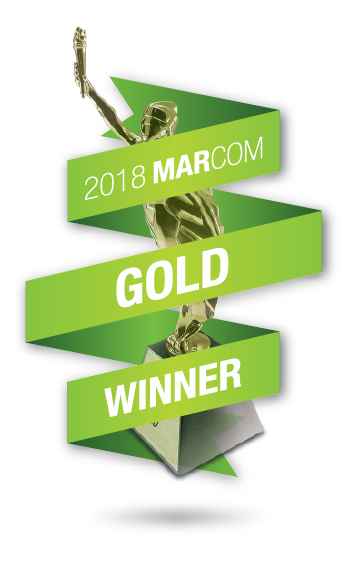 Following the launch of its new website in June, the Town of Taber is delighted to announce it has received four prestigious, international awards, all from the Association of Marketing and Communication Professionals (ACMP). The awards include Gold Levels in the Hermes Creative Awards, dotComm Awards, AVA Digital Awards, and the MarCom Awards.

The Town of Taber launched its new website (www.taber.ca) following months of design and collaboration between Departments as spearheaded by the Information Technology Department and communications staff. The new site designed by Granicus GovAccess (formerly Vision) focuses on ease of access for users, with simpler navigation, mobile adaptability, accessibility and translation services, emergency alerts, as well as text and email notifications to subscribers. 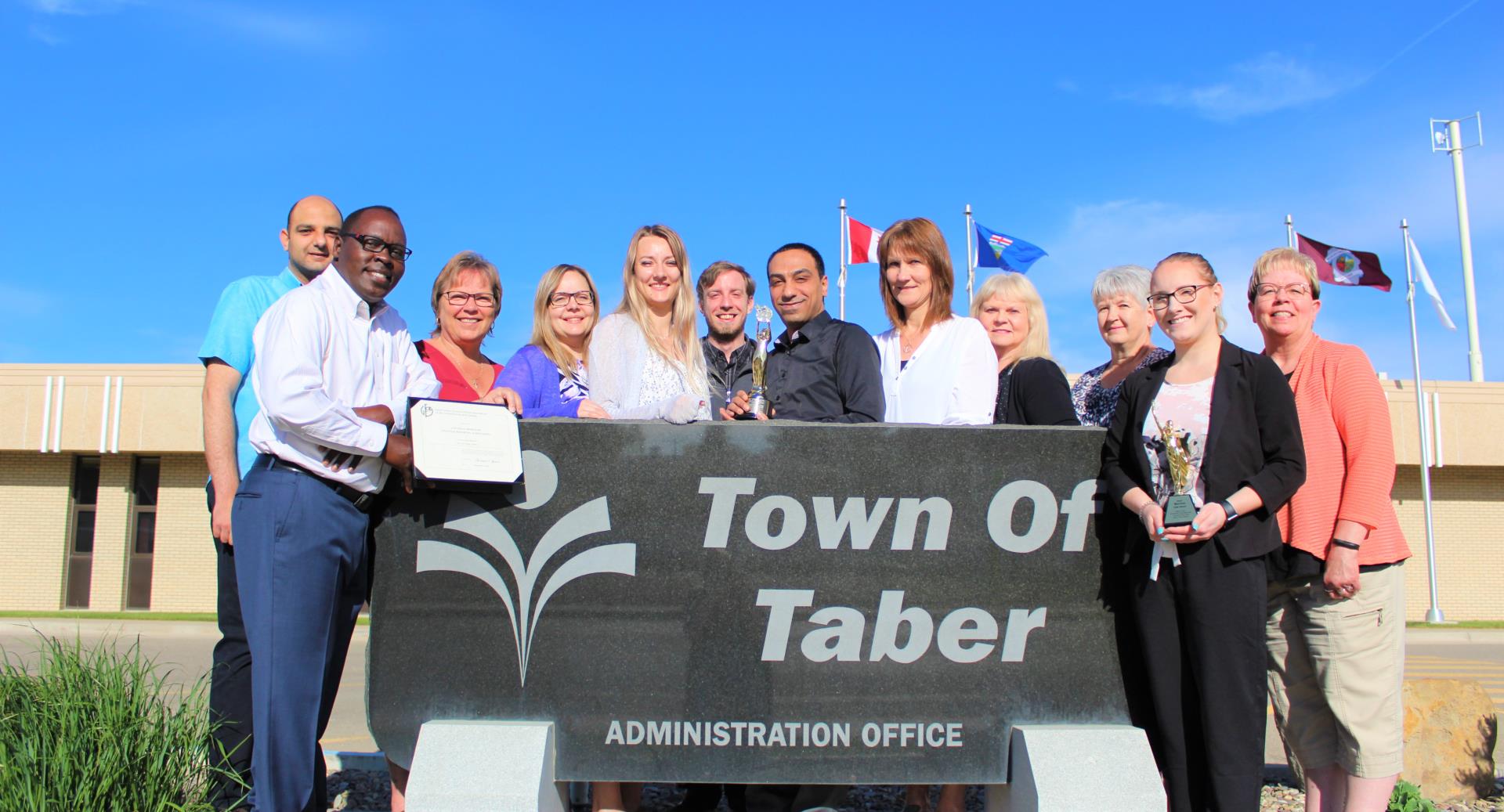 The Town of Taber is pleased to announce that its Finance Department is a recipient of a Canadian Award for Financial Reporting from the Government Finance Officers Association of the United States and Canada (GFOA), the fifth year in a row the Town has received the honour.

Reports submitted to the CAnFR program are reviewed by selected members of the GFOA professional staff and a review committee, which comprises individuals with expertise in Canadian public-sector financial reporting and includes financial statement preparers, independent auditors, academics, and other finance professionals. 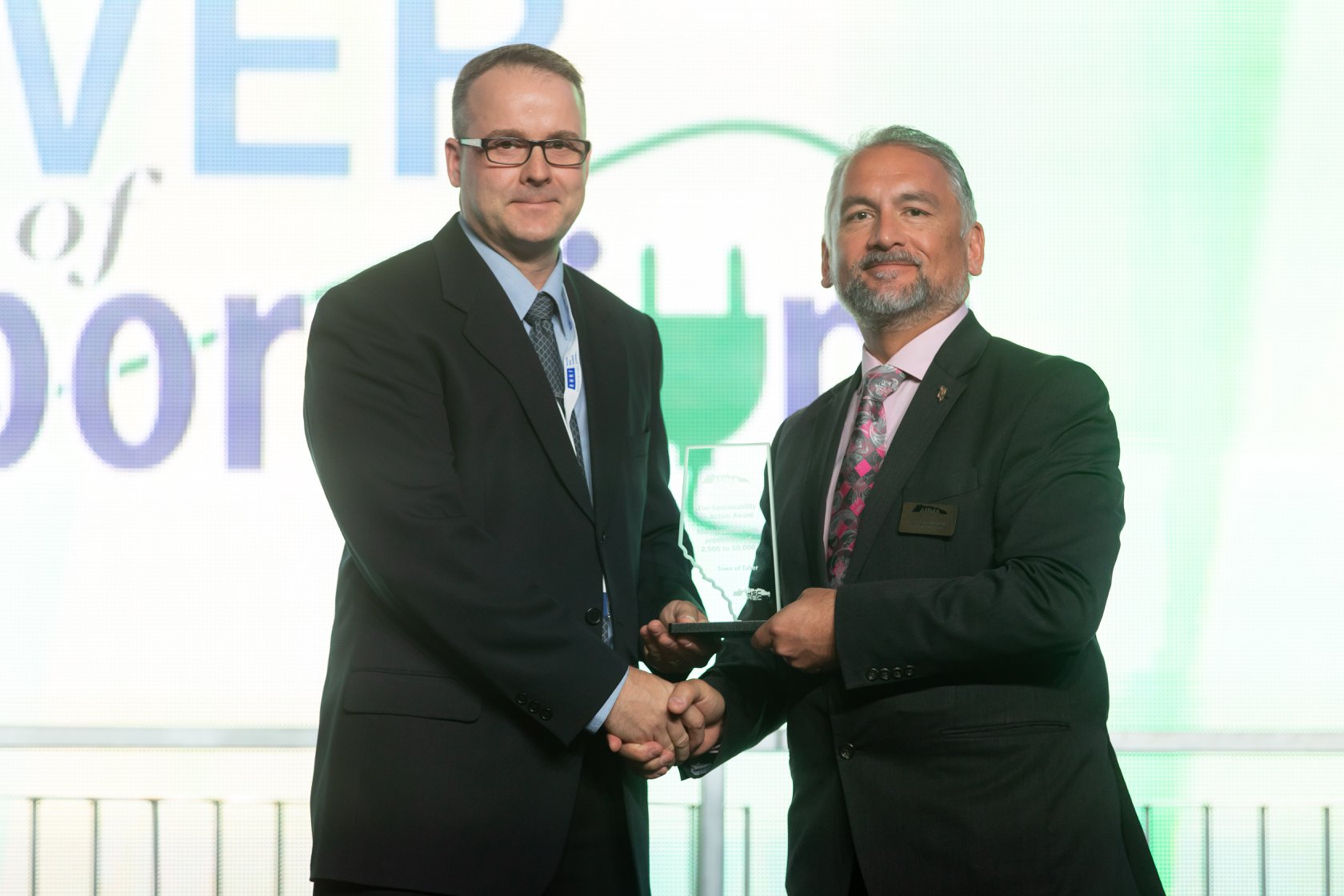 The Town of Taber is honoured to be a recipient of the Alberta Urban Municipalities Association’s Sustainability in Action Award for its Municipal Solid Waste Initiative.

According to the AUMA, the Award is presented to “an AUMA member that has demonstrated excellence in... achieving measurable outcomes in environmental sustainability,” and was awarded to the Town of Taber at the 2018 AUMA Convention in Red Deer on September 26th.

Applications from municipalities across Alberta were submitted, and the Town of Taber and the Town of Devon were the successful recipients in the Population 2,500 – 10,000 Category.

The Municipal Solid Waste Initiative was implemented in 2016 and has ultimately resulted in a 75% diversion rate as compared to 6% prior to MSWI implementation.

This is the third award to be presented to the Town of Taber for its Municipal Solid Waste Initiative following the presentation of the Recycling Council of Alberta’s Rs of Excellence in 2017 and the Communitas Awards’ Green Initiatives in 2018. 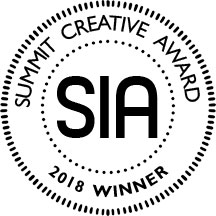 The Town of Taber Administrative Services Department is a recipient of a 2018 Gold Summit Creative Award for its Taber Memorial Gardens Mapping Project.  This award is an international accolade that honors excellence in creativity and communications. The Summit International Awards (SIA) was founded in 1994. The 2017 competition "drew more than 5,000 submissions from 24 countries in 18 major categories."

By SIA bylaw, only 1-3% of submissions are ever allowed to win a Gold level, meaning that the Town of Taber's award was chosen from the hundreds of submissions to be in that percentile. In 2018, only 1% of all submissions were Gold winners.

The Summit Creative Award is the second international award to be presented to the Town for its Taber Memorial Gardens Mapping Project, the first being the Hermes Creative Awards. The award was presented to Carley Grant of CMG Designs and to the Administrative Services Department at the October 9, 2018 Council meeting. 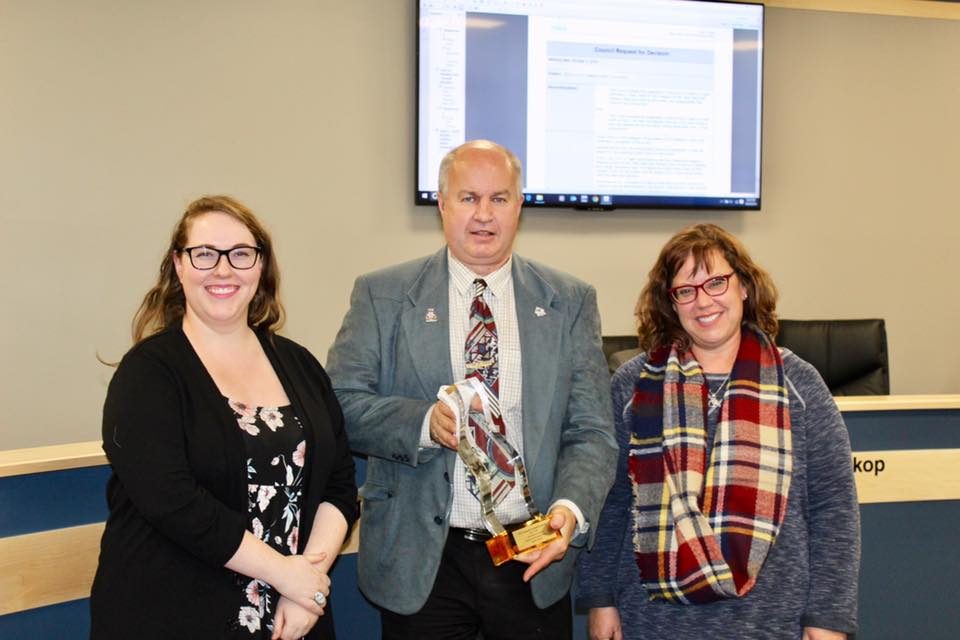 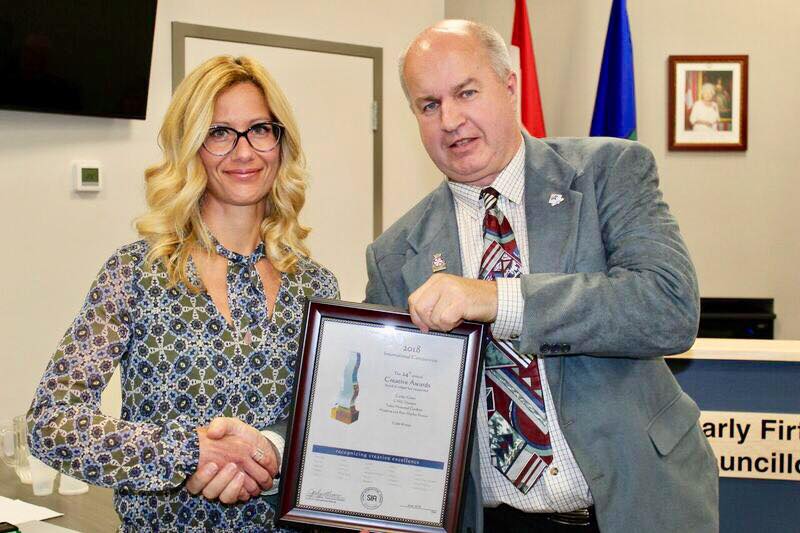 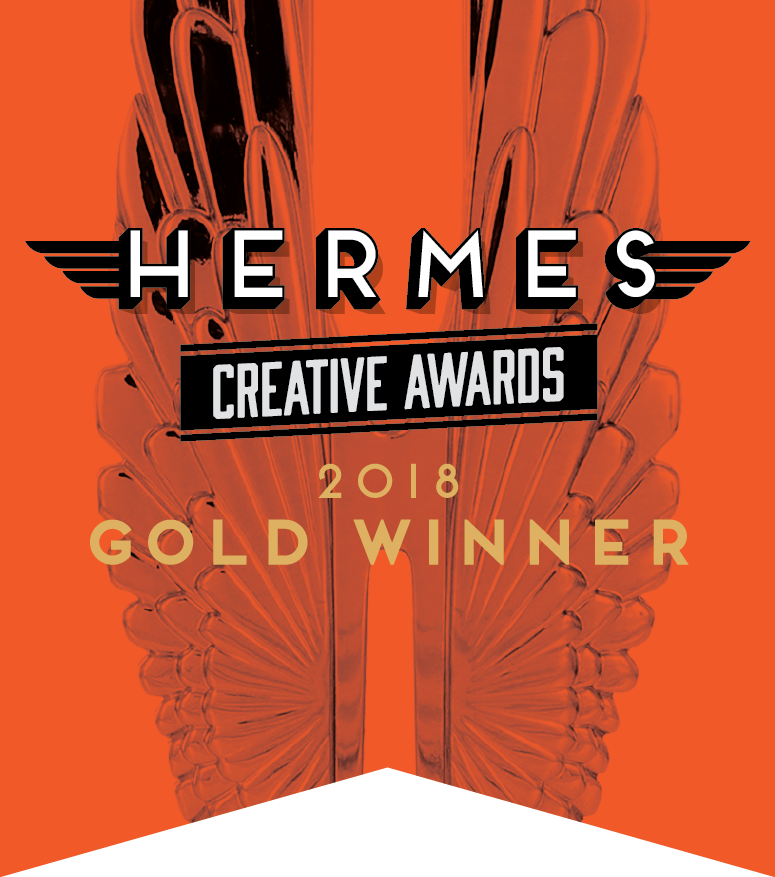 The Town of Taber is proud to be the recipient of two gold Hermes Creative Awards for its Taber Memorial Gardens Mapping Project and its Growing Good Neighbours Guide.

The Taber Memorial Gardens Mapping Project involved a complete refresh of the previous cemetery map and included row markers and a detailed interpretive map for the Gardens. Initiated in 2017, the project’s design was created by Carley Grant of CMG Designs, who is also a co-winner on the project.

The second award-winning project is the Growing Good Neighbors Guide, a project initiated by the Planning and Economic Development Department and designed in-house by Administrative Staff. Similar to publications that other municipalities use, the Guide is a handbook that outlines the most frequently-asked questions about Town bylaws, specifically ones that relate to the responsibilities of property owners in the community.

The Taber Memorial Garden Mapping project was installed in 2017. The Growing Good Neighbours Guide is expected to be printed in the near future. The awards were presented to their recipients at the June 25th Council meeting. 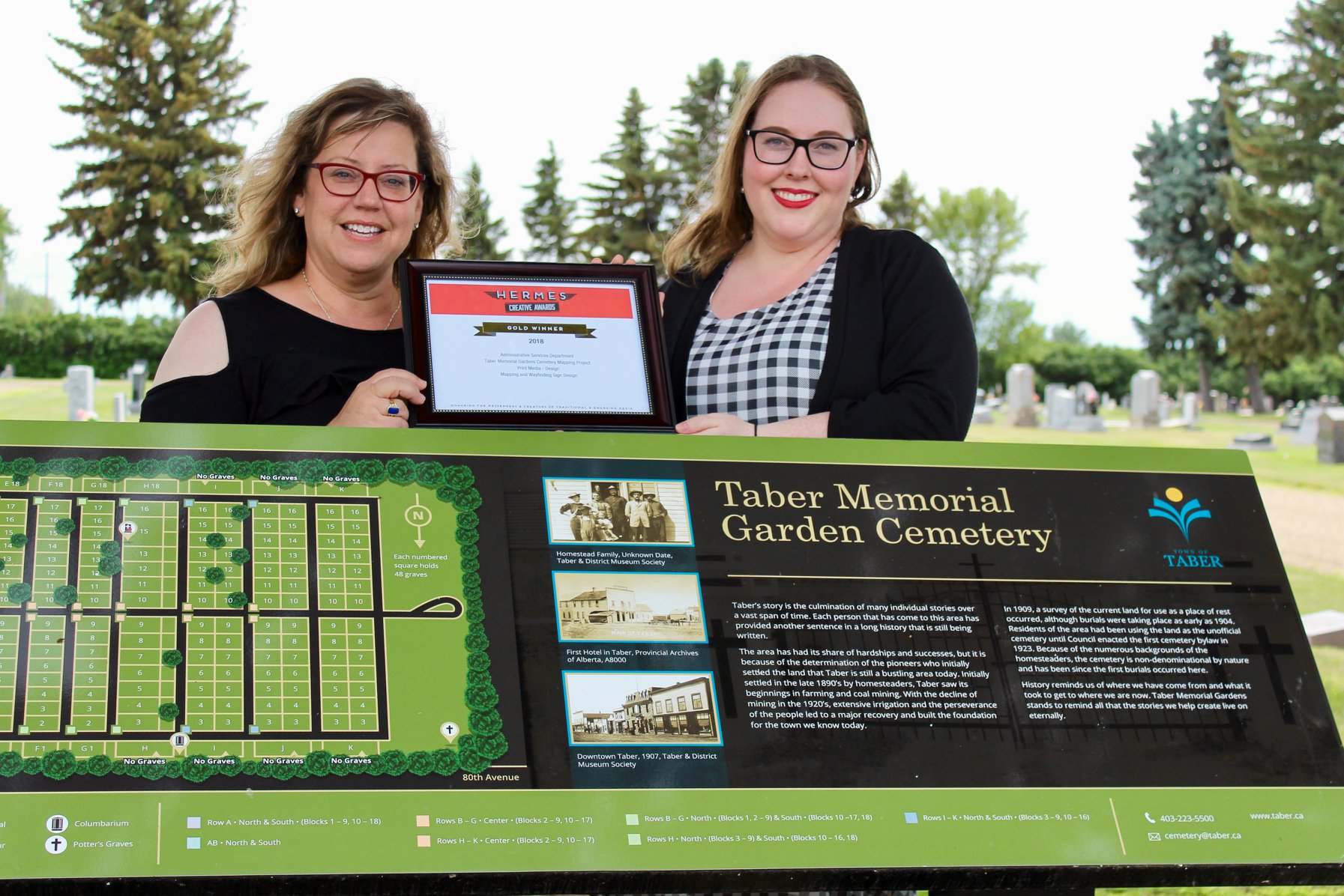 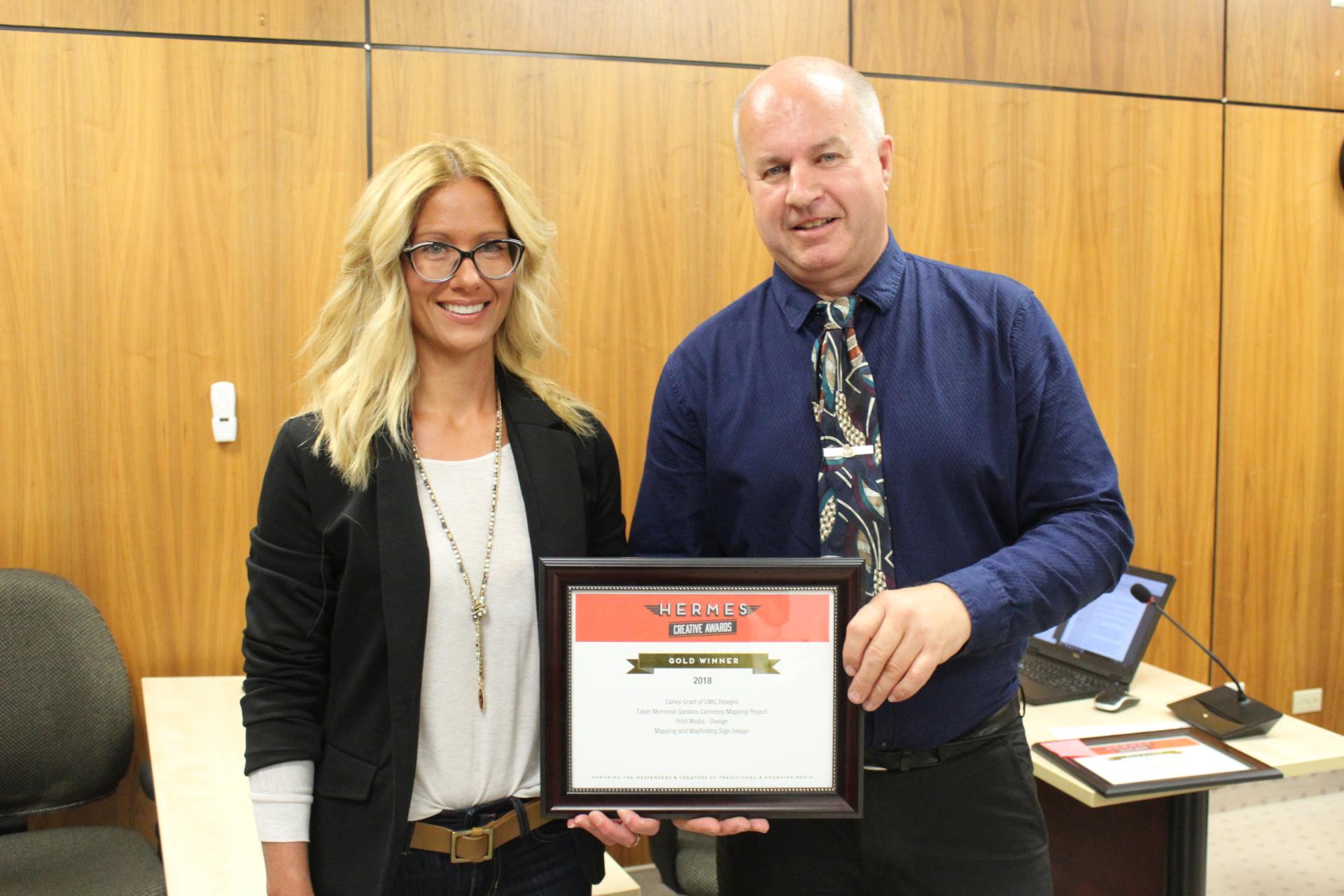 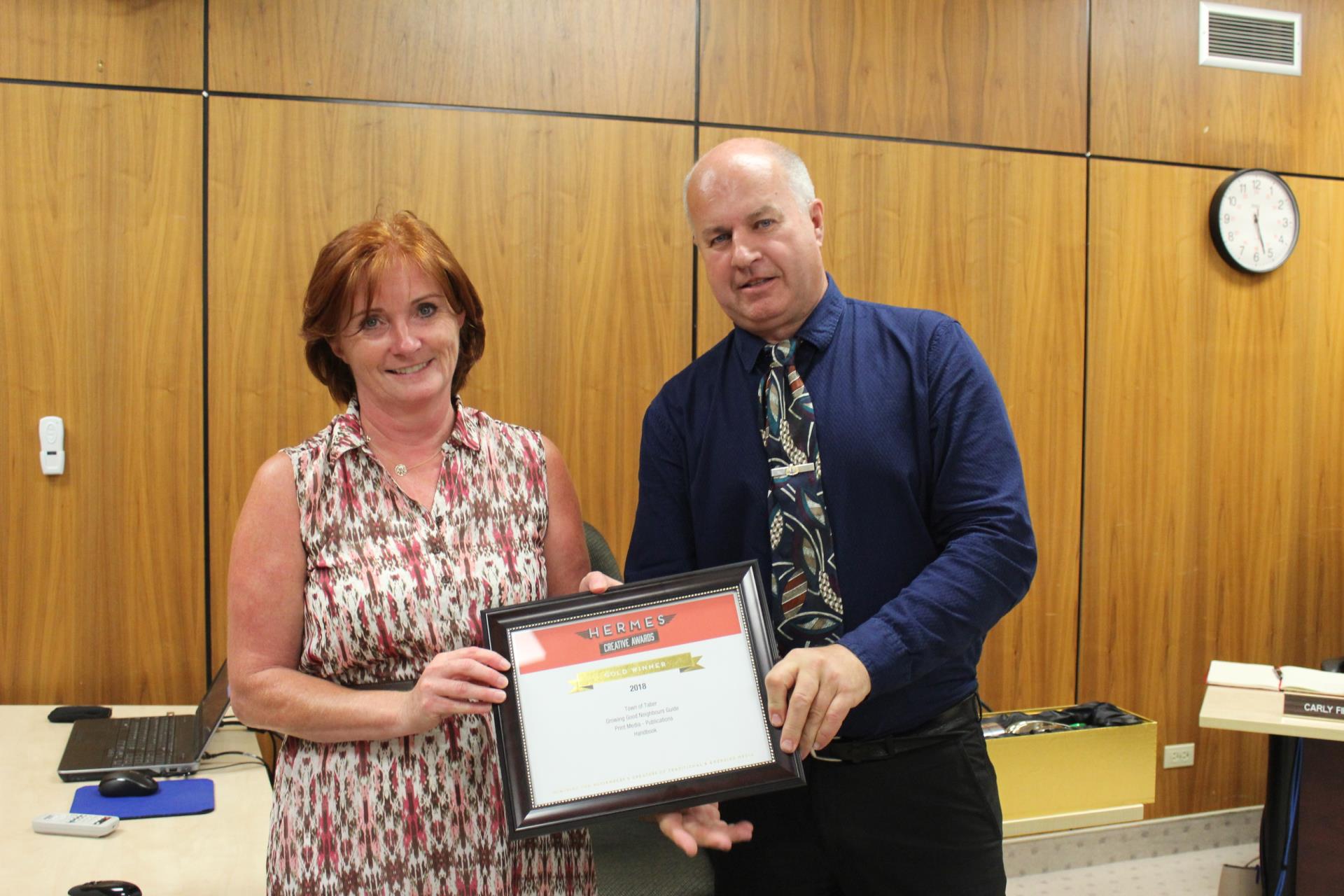 The Town of Taber is pleased to announce that its Municipal Solid Waste Initiative (MSWI) has been awarded a 2018 Communitas Award in the category of Ethical and Environmental Responsibility – Green Initiatives.

The Communitas Awards is an “international effort to recognize exceptional businesses, organizations, and individuals that ... are changing how they do business to benefit their communities.” The name stems from the Latin word meaning “people coming together for the good of a community,” and the Award is sponsored by the Association of Marketing and Communication Professionals.

The Green Initiatives Category evaluates a company’s environmental practices and green programs. The Town’s MSWI was introduced in 2016 as a way to move towards more environmentally-minded waste collection initiatives, and included 3 carts for recycling, organics, and residual waste.

Within 8 months of the launch in May 2016, the Town of Taber saw a 55% and 17% diversion rate for organics and recycling, respectively. These numbers indicate the percentage of waste diverted from the landfill. The Town has also seen 34% decreases in both transport costs and truckloads leaving the Transfer Station since the MSWI was implemented. 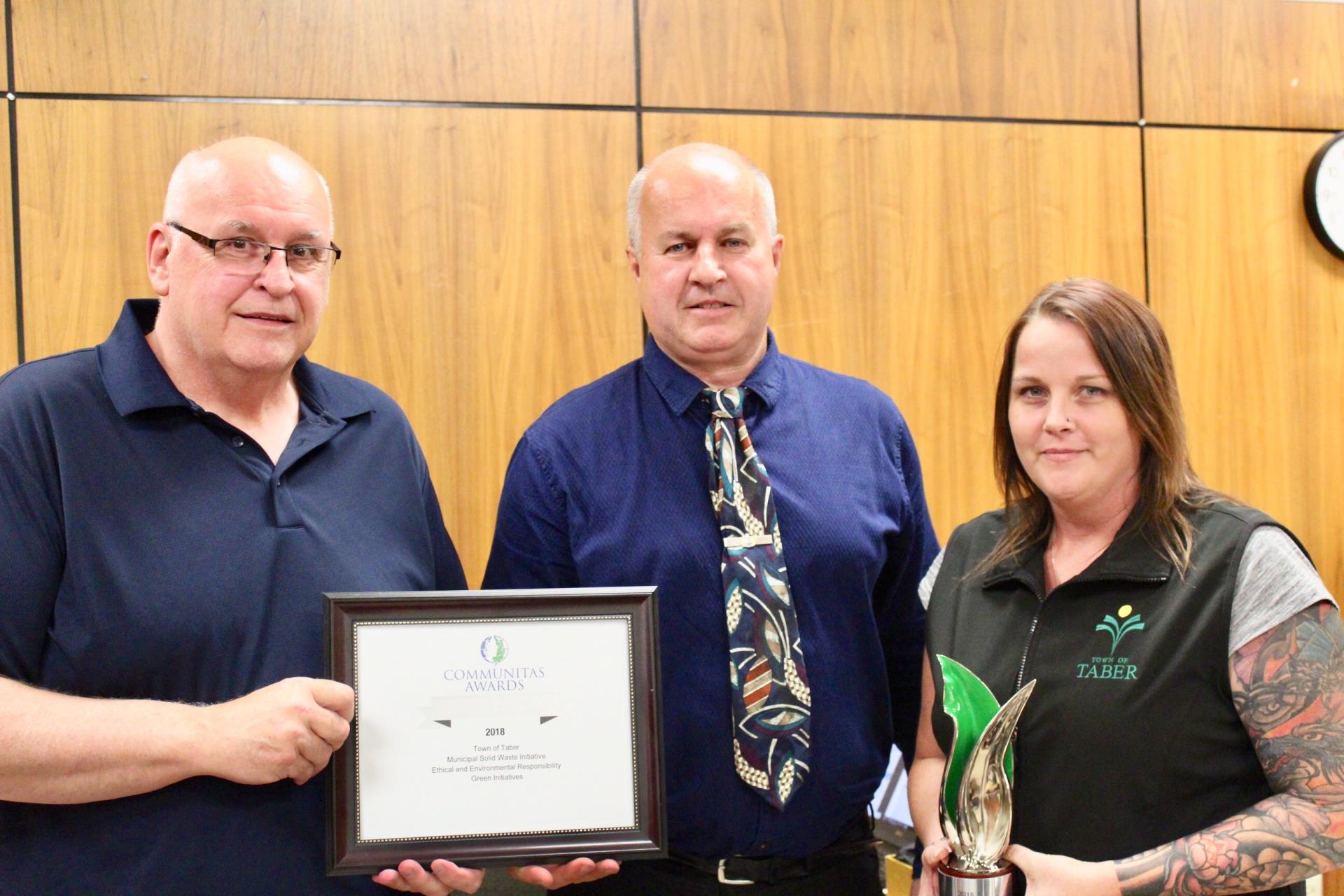 “We knew that Taber could be a hub for environmental practices in Southern Alberta” said Director of Engineering and Public Works Gary Scherer, “Winning the Communitas Award shows how dedicated our staff and citizens are to making this idea become a reality.”

“Winning an international award is no small feat, especially one that recognizes a group effort benefiting a whole community,” said Mayor Andrew Prokop, “The cooperation and effort the people of Taber have demonstrated with our new waste system truly embodies that spirit, and I would like to thank them for their continued efforts.” 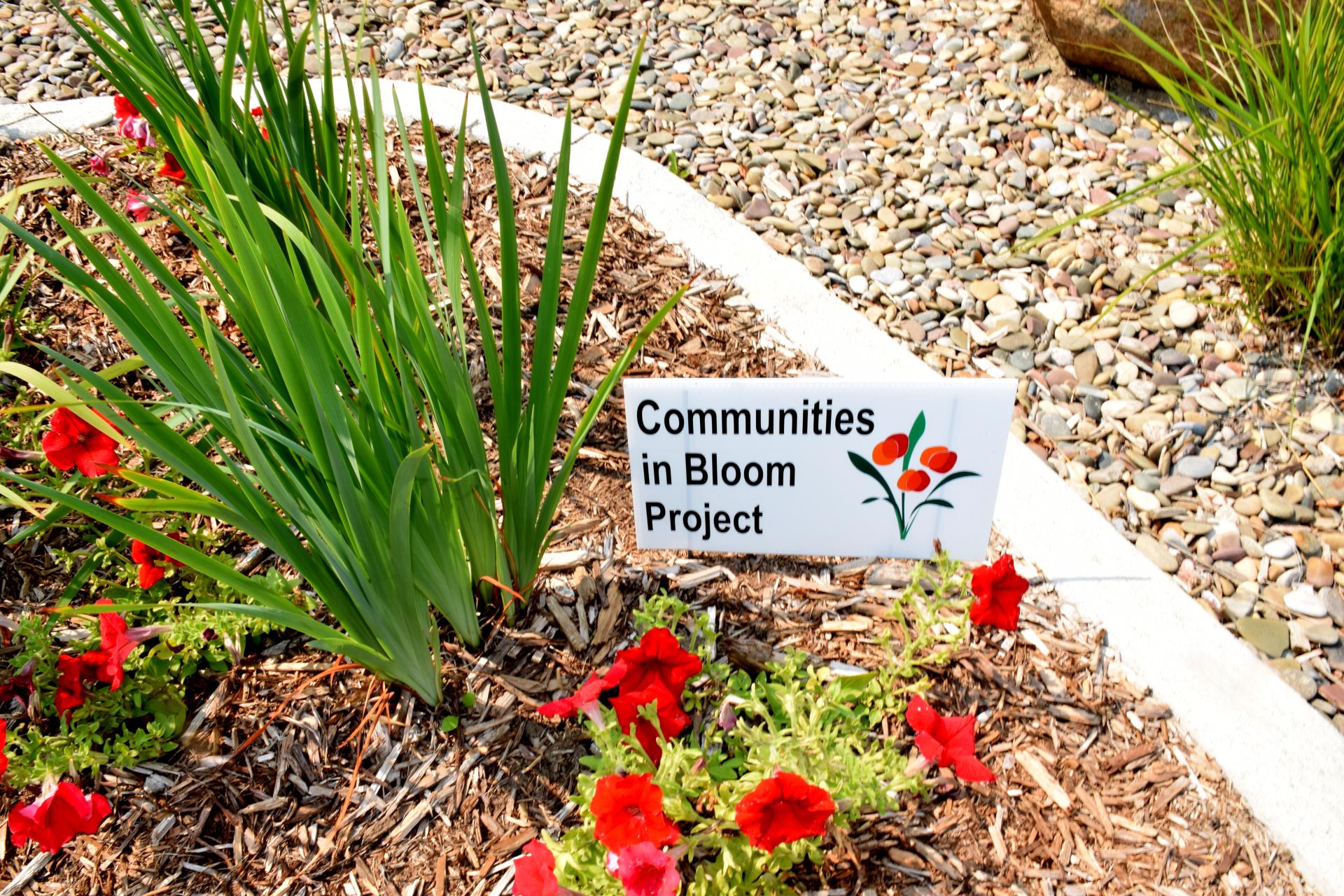 For the second year in a row, Taber has been announced as a provincial winner for Communities in Bloom. The judges awarded 5 blooms in the “Population 6001-15,000” category during the awards ceremony held in Lacombe on September 23rd. In addition to the five blooms, a special mention was made for the Canada 150 metalwork art currently on display at the entrance to Confederation Park.

While floral displays play a part in the judging process, a number of categories are also considered when a community is evaluated by the judges. These additional criteria include tidiness, environmental action, heritage conservation, urban forestry, and landscape. Taber received top marks in all categories, with the judges noting “the tidiness, order, cleanliness and first impressions upon entering the community indicate the community is well-maintained and the pride in the community was evident.”

Judges also noted the close working relationship between Communities in Bloom and the Town Recreation Department and Public Works Department, who also received points of praise within the evaluation. The Town’s quick removal of graffiti and the 3-cart waste system were highlighted in the tidiness and environmental categories respectively.

“We’re thrilled to have won this award for a second time,” said Jean Holman, president of Taber Communities in Bloom, “we have a very dedicated group of volunteers who work hard throughout the year to shine a light on how beautiful Taber truly is, and it’s an honour to be recognized.”

“The Town of Taber is incredibly proud of this award,” said Aline Holmen, Director of Recreation, “The volunteers and staff should be commended for their exceptional effort, and we look forward to continuing to work with the Communities in Bloom volunteers on their vision for the future.

The Town of Taber would like to thank the Communities in Bloom volunteers for their continuous dedication to making our community blossom. The Town would also like to thank all the residents and businesses who contribute their own efforts to beautifying our community. It is because of the cooperative effort that Taber truly is a “great place to grow.” 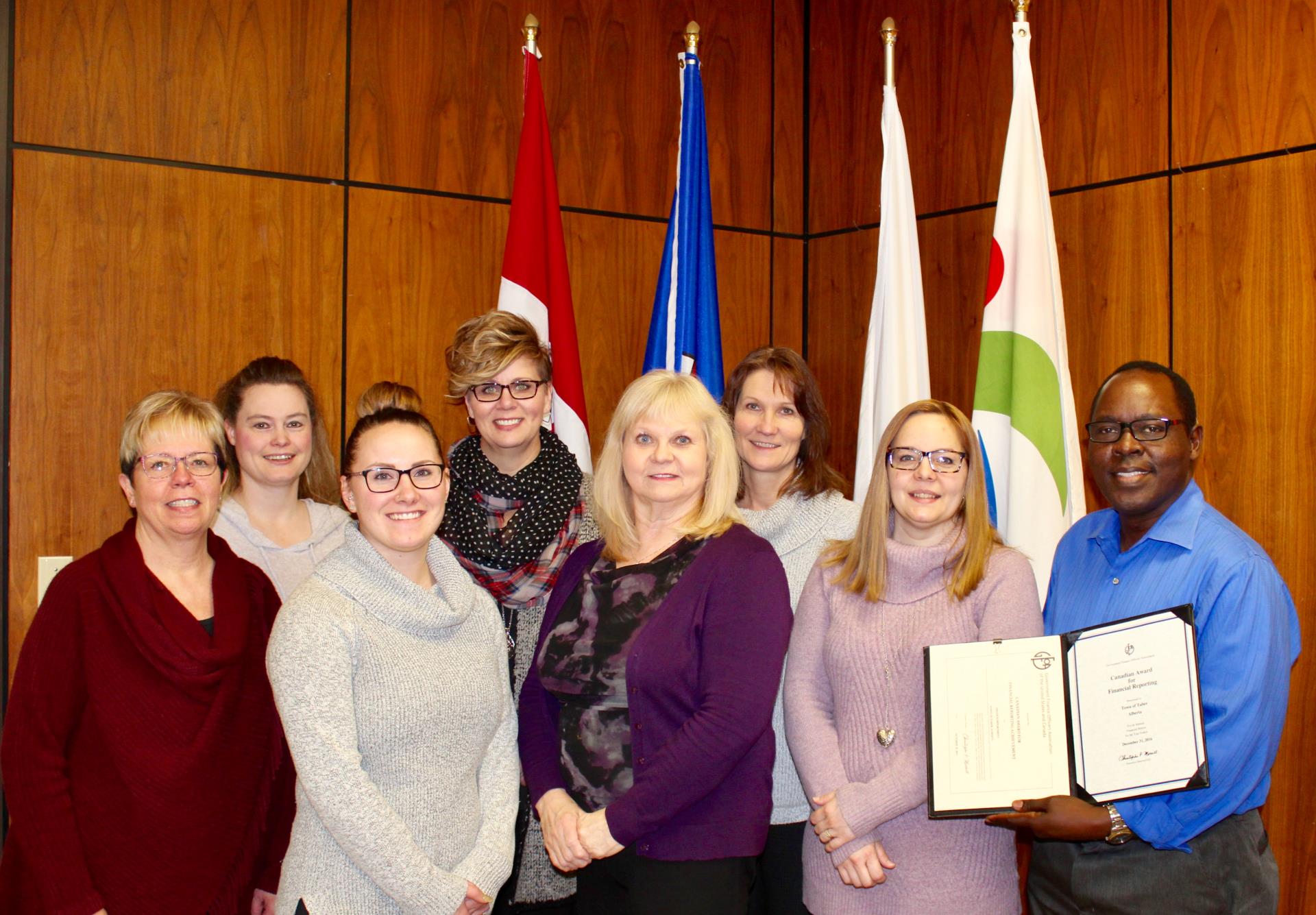 The Town of Taber is pleased to announce that its Finance Department is a recipient of a Canadian Award for Financial Reporting from the Government Finance Officers Association of the United States and Canada (GFOA), the fourth year in a row the Town has received the honour.

Established in 1986 to encourage the production of high-quality financial reports, the Canadian Award for Financial Reporting bestows the award on municipalities who go above and beyond what is required for their annual external audit. The GFOA outlines that the award honours those who “prepare comprehensive annual financial reports that evidence the spirit of transparency and full disclosure.” 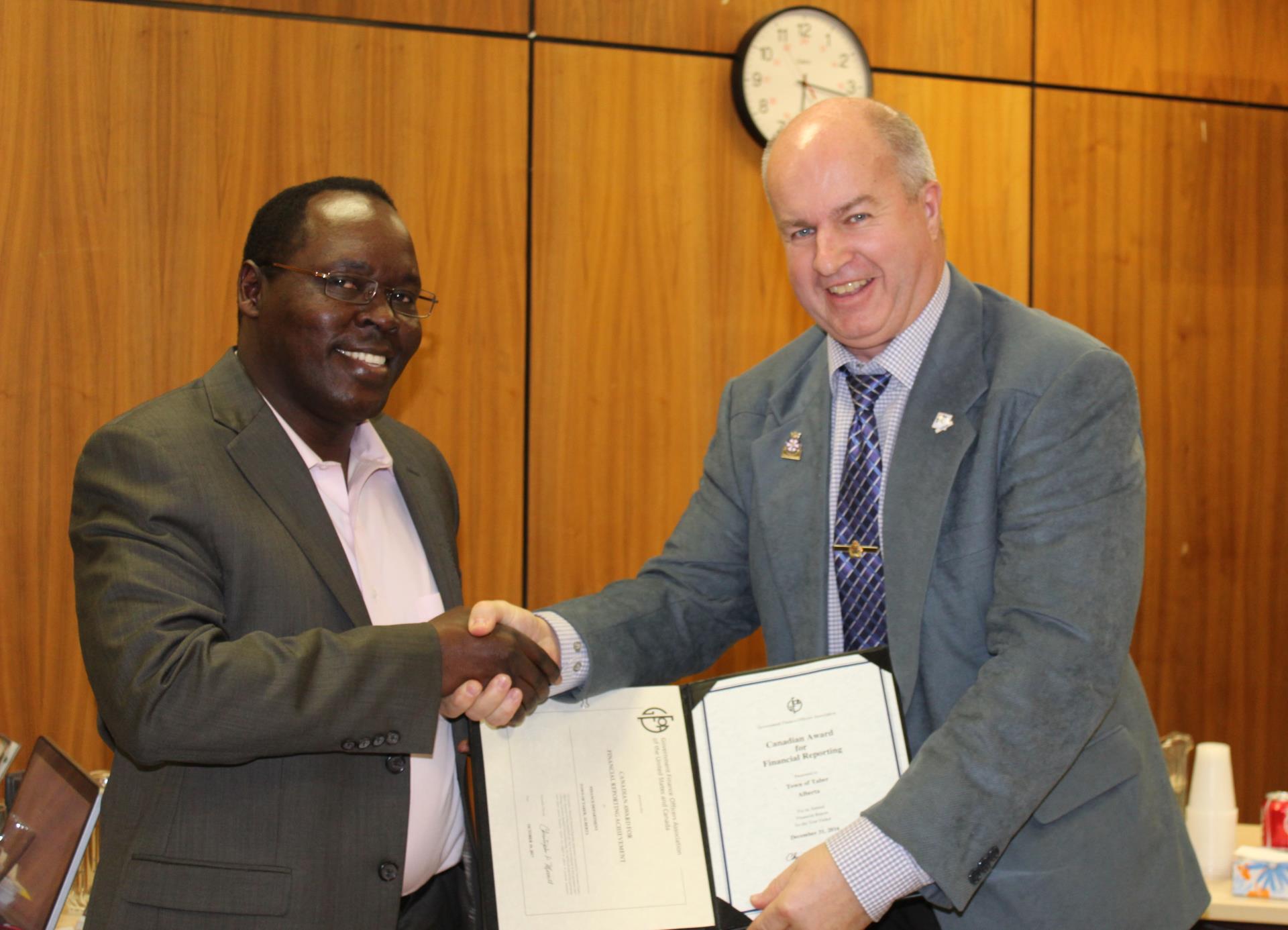 “Receiving this award is a testament to the dedication of Administration and Council in upholding the financial health and viability of our community,” said John Orwa, Director of Finance, “the collaborative effort allows us to deliver transparent finances to our community and the citizens of Taber.”

The certificate of achievement was presented to the Director of Finance by Mayor Andrew Prokop at the regular meeting of Council on December 18th, 2017. 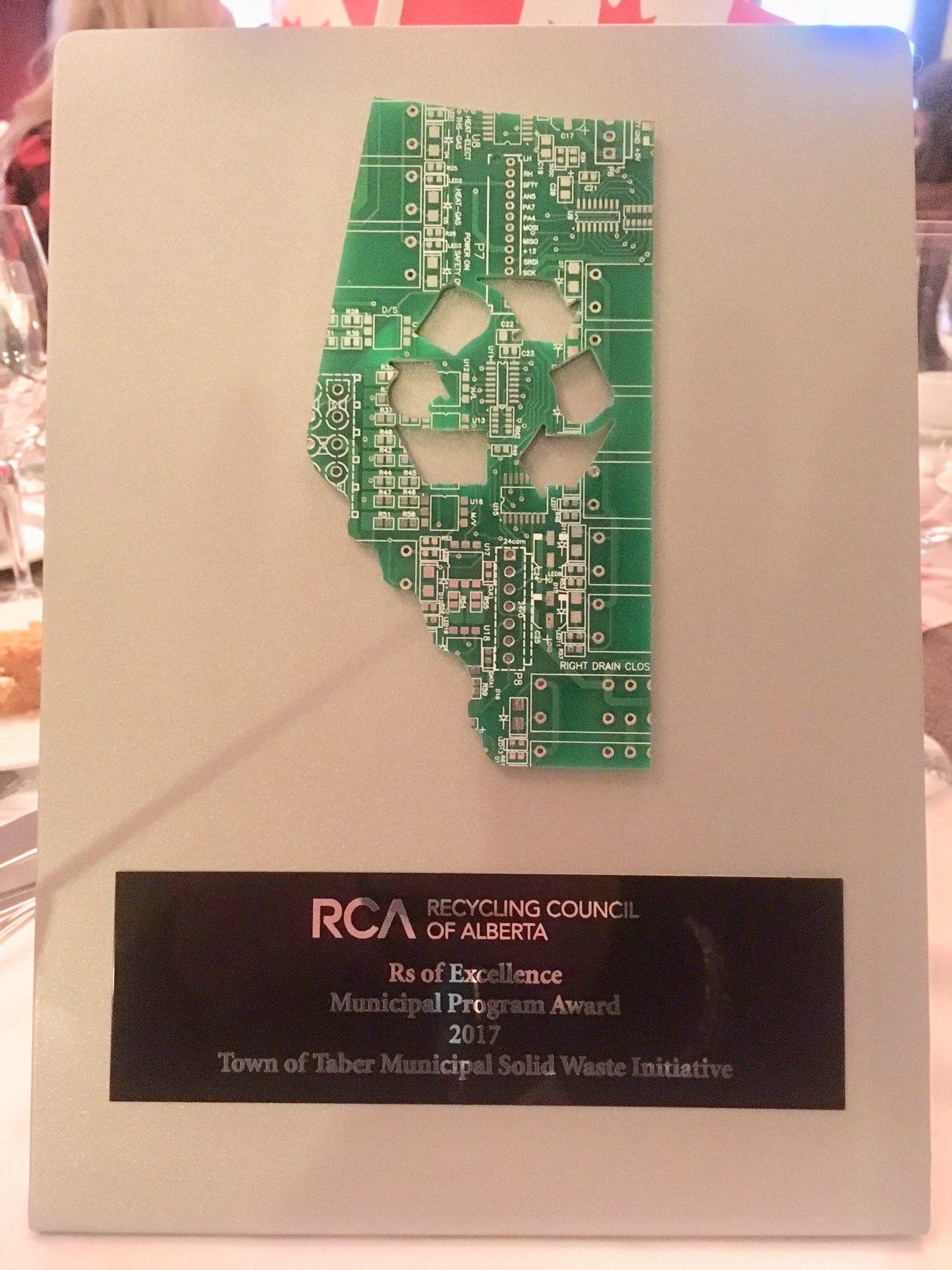 The Town of Taber’s Municipal Solid Waste Initiative was recognized with a Municipal Program Award from the Recycling Council of Alberta at their annual conference on October 12th, 2017.

Besides the carts, the Initiative also included a number of communication initiatives for residents, an in-depth calendar and information booklet provided with cart delivery, and a process for including the three carts in Taber’s annual Cornfest so even visitors and vendors could participate in recycling and composting.

With careful budgeting and planning, the Town of Taber has been able to provide the Municipal Solid Waste Initiative at no extra cost to ratepayer’s bills.

In addition to the benefits in increased recycling and organic composting, the Town has also seen an increase in total revenue for waste collection since the program’s start in 2016. This increase is partially attributed to the upsurge of proper usage of the Transfer Station for large amount of waste. Additionally, the Town has decreased its transport costs by reducing the total truckloads taken from the landfill. 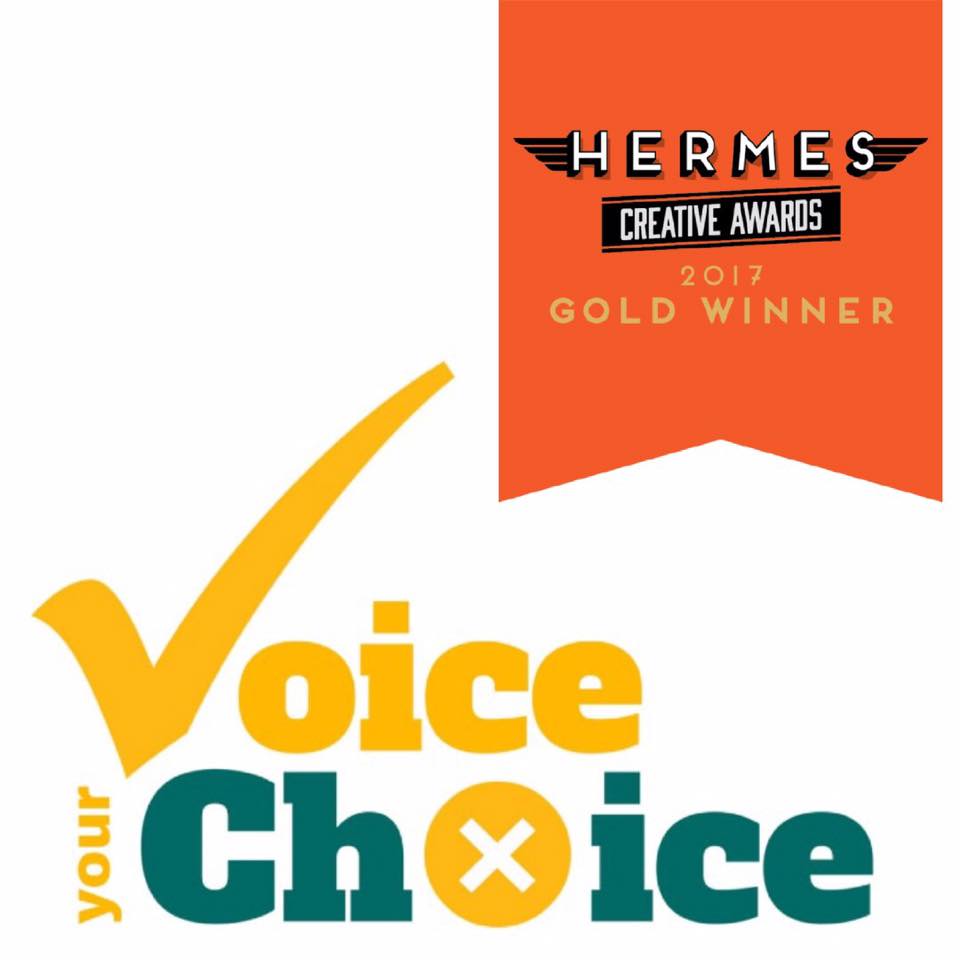 To foster better awareness of the upcoming municipal election, the Administrative Services Department created a new design for Taber’s election logo. The design uses the pantone colours of the official Town logo, without completely evoking the same imagery of the trademarked logo. The phrase “Voice your Choice” is used as a reminder to all citizens that voting is their chance to have their voice heard.

The Hermes Creative Awards is administered and judged by the Association of Marketing and Communication Professionals. There were over 6,000 entries from throughout the United States, Canada and 35 other countries in the Hermes Creative Awards 2017 Competition. Entries came from corporate marketing and communication departments, advertising agencies, PR firms, design shops, production companies and freelancers.

AMCP judges are industry professionals who look for companies and individuals whose talent exceeds a high standard of excellence and whose work serves as a benchmark for the industry. Winners were selected from 195 categories. Only 22% of the entries won a Gold Award.